skip to main | skip to sidebar

Rob's "Wing it" Mac and Cheese

Stuff you need:
Process
Posted by Maine Mom at 7:28 AM No comments: 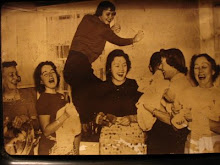 This picture is from the kitchen at the Merry Meeting Farm. A can of plum pudding exploded and they laughed and laughed and laughed! The photo was made into a serving tray, from which I made a digital copy. Pictured is my mother HiHo, my grandmother Mima, my great-grandmother BaBa, and some cousins.

Maine Mom
I am a mom of three children; trying to evolve, living locally and sustainably, and putting my MS to use, one ecological footprint at a time. I am a Native New Englander with a sense of wonder that began at a young age watching sunsets with my mother. I pass this on to my children and am preserving our family history in the process.

A Merry Meeting to Everyone!

My mother HiHo's love of cooking was passed on to me from generations before her. She asked us to remember her with flowers and music, but I also remember her with cooking. This blog is to share this love and at the same time preserve and publish the generations of recipes handed down to me from my family's kitchens all over New England. I encourage comments and stories. Just click on the recipe title, and the link will take you to the comment options. If you knew my mother or anyone like her, there are volumes of stories to share and I invite them to be woven into this blog. So anytime a recipe moves you to share a story, we'd love to hear it! Thanks for reading, now go cook!